I was a six-year-old child. And like any girl child, I wanted to put on my mother’s cosmetics. My mother would not really encourage me but would neither she disapprove of it. Until one day while playing on her dressing table, I pickedup her sindoor (vermilion) and put it on my forehead. Later when I tried removing it, it just wouldn’t come off. Soon my mother saw the vermilion on my forehead and this time she was very angry. I was perplexed. Never had I made her so angry just by playing with her cosmetics. I cried a lot. Sometime later my mother consoled me and told me that the Sindoor was only for married women and not for children. I could not fathom the full implication of this until years later. I understood the religious and cultural significance and only then I realized why my mother was so angry! And today I am going to share with you what I have learnt about the humble sindoor.

Sindoor (Kumkum or vermilion), a red streak along the parting of a woman’s hair, is a symbol and strength of every Indian woman. It is applied for the first time by her husband during the wedding ceremony. It is symbol of belonging. It is a mark or symbol on the forehead, love and respect of a wife towards her life partner. It has many medicinal values and many symbolical reasons behind wearing it by a married woman. 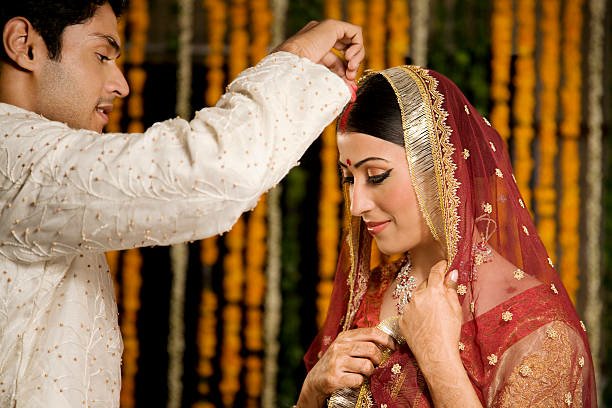 So, let us know how can we make sindoor. Basically, it is prepared by mixing lime, turmeric and mercury. Churning all of these to get a bright red colour.

It helps in controlling blood pressure and regulates hormones, that is secreted from the pituitary gland. It activates sexual drive, that is why sindoor is prohibited for the unmarried and the widows. It relieves stress and increases concentration power. It is the power and energy that every Indian woman possesses and the red bindi signifies, love, devotion, power and a part of the Indian tradition to denote that the woman is married and committed towards the bond which she shares with her partner.

It signifies, sacredness, auspiciousness and happiness that a woman brings in the new life which she creates after her marriage. Bengalis celebrate, “Sindoor Khela” every year on the last day of Durga Pooja. During this ceremony, all the married women offer sindoor to the Goddess Durga and they apply sindoor on each other in the spirit of divine blessings. 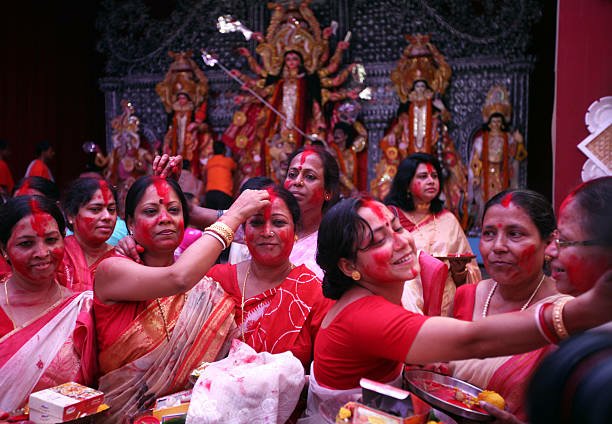 The vermilion symbolizes the female’s energy of Parvati and Sati according to the Hindu mythology. Sati is regarded as the most ideal wife who gave her life for her husband’s dignity. So every Hindu wife is supposed to emulate her. Hindus believe that Goddess Parvati protects all the men whose wives apply sindoor.

Sindoor has been worn by women and played an important part in the Hindu culture for more than five thousand years. Its usage has been found even in the Harappan Civilisation. Use of sindoor has been mentioned in the Puranas, Lalita Sahasranam and Soundarya Laharis.

Sindoor enhances the grace and beauty of a woman. Red is a colour for love and it is applied by Indian women to win their husband’s hearts. A woman looks beautiful by applying sindoor, sparks a fire when needed for her protection. A bright red sindoor reflects the piousness of a lady and the women’s strength and dignity.

I am a mother, homemaker, Chef, Teacher and lots more! I believe that life is to be celebrated, I try to write about my experiences as I grow spiritually and emotionally on my journey. Stay tuned for the Feast of Life!
Pallavi Acharya